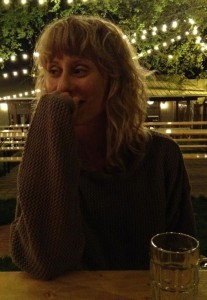 JEWLY HIGHT knows her roots.  You could even say she wrote the book.  One of the most well respected and hard working women in music journalism today, Hight is the author of the 2011 book Right by her Roots: Americana Women and Their Songs and is in the early stages of her second [as-yet-unnamed] title.  Her words are commonly included on CMT Edge, Nashville Public Radio, American Songwriter, Relix, and Nashville Scene.  And now, we can add The Sitch to that list.  Hight will be contributing her unparalleled perspective to the blog in the coming months, and we couldn’t be more thrilled.

To kick things off, we invited Jewly to submit this month’s MIXTAPE and, true to form, she brought her own vision to the task.  Here’s what she’s listening to right now:

‘Lately I’ve been pondering the attention that the lyric prowess of singer-songwriters gets in the broader roots music world. Literary-caliber words and complex storytelling tend to earn not only critical respect but a rapt listening room audience. But there are loads of other ways that music makers can put their intelligence to use. So I’ve built this playlist from a small batch of examples of how I’ve heard it done in recent years….’

Track: “Right Down the Line”

‘Raitt experienced a career resurgence after releasing Slipstream last year. I’m sure I wasn’t alone in being thoroughly relieved to find her supple musicality intact. She’s as comfortable in her skin and as warmly conversational as any blues-pop singer, slide guitarist or band leader I’ve yet heard. She also celebrates the sex in the music in a way that’s both self-aware and deeply felt, and that’s a hell of a rare thing.’

Track: “A Change Is Gonna Come”

‘I was impressed with the seemingly infinite array of tone and syncopation that Ben Sollee could coax out of his cello from the moment I heard him with Otis Taylor and The Sparrow Quartet. But it was when I heard him render this Sam Cooke classic with such a fluent, rhythmically nimble groove—not to mention lustrous crooning—that he really got my attention.’

Track: “King of the Road”

‘I’d been wondering why nobody had ever tackled any sort of Roger Miller tribute album. And last year, Tim and Mollie O’Brien and some of their kin did just that. This Tim-led track feels like an especially natural fit: one fount of musical and lyrical wit covering the work of another.’

Track: “You’re the One I Love”

‘Last year, I talked with Watkins about how the fact that she’s primarily a fiddler—as opposed to, say, a guitarist—has led her to feel out her phrasing differently in her solo singer-songwriter work. Sometimes she’ll dig into the downbeat as hard as she would a fiddle solo. This Everlys cover is one song that she attached particularly aggressively, and she wound up with a take on it that’s worlds away from anybody else’s.’

Sara Watkins – You’re The One I Love (Feat. Fiona Apple) from Gerardo Mariscal on Vimeo.

I’ve been seriously digging Bobby Rush’s upcoming album, the way the grooves are simultaneously so taut and so loose and swampy, the sex and knowing sense of humor in his delivery. So I went searching for a video of him in action on stage. Talk about attitude.

Perhaps you heard these guys in Beasts of the Southern Wild this year. They’re a young band led by brothers Louis and Andre Michot, a fiddler/singer and accordion player, respectively, who know Cajun musical traditions inside and out. They sing in French, even when covering the Rolling Stones, but they also spike their sound with psychedelic effects and experimentation on their instruments.

MixtapeJul 11
MIXTAPE: David Newbould’s Songs for Sinking In / Digging Out