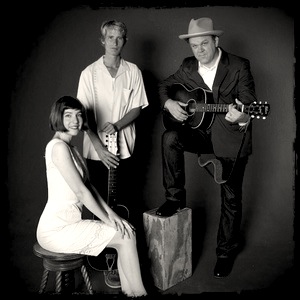 John with his friends Becky and Tom

When most people think of John C Reilly‘s musical talents, various things spring to mind:  his soft-shoeing spin as Amos in Chicago, duetting with Will Ferrell in Step Brothers, and of course in the epic musical bio-pic farce Walk Hard: The Dewey Cox Story (though, to be honest, I’m quite partial to his turn as one of the singing cowboys in Robert Altman’s film version of A Prairie Home Companion).

But here in LA, Reilly’s musical talents reach well beyond the movie screen.  Tuesday night features John and pals Becky Stark (Lavender Diamond) and singer-songwriter Tom Brosseau (among several other very special guests) at the Bootleg Theatre for a night of roots music and tight harmonies.

BGLA has the scoop from John regarding this week’s performance, his introduction to roots music, and a love of fish tacos that can only be satiated in Los Angeles…

How did the John C Reilly & Friends show come about?

John:  I’ve known Becky[Stark] for a long time through different things for a long time, but a little while ago we did a Dolly Parton/Porter Wagner duet at a benefit in Topanga, and that’s what started it.  I have always been a big fan of close harmony and the first time I saw Tom Brosseau playin Los Feliz I realized a voice like his is such a rare instrument.  I reached out to him and it turned out to be a great combination.  The reason I call it John Reilly and friends is that’s exactly what it is.  So many amazing and talented people from various parts of my life coming together for this music.  The whole thing is just about keeping the candle burning for the songs – we do all covers and it’s just a labor of love.

What are your musical roots?

John:  I grew up with a pretty musical family and did a lot of musical theatre growing up.  I have really eclectic tastes.  Like anything in life, you get in to certain phases. I had a blues band for many years, and through that, realized I was really drawn to the oldest of blues songs which in turn introduced me to roots music.  I am drawn to things that have an eternal quality, and the songs that we sing have something eternal about them.  We make it as much about the community surrounding the music as it is about the music itself.

What are your favorite musical venues in Los Angeles?

John:  The mothership is Largo.  Their attention to the quality of the experience is off the charts.  I’m a big fan too of the Troubadour.  And the Bootleg –they’ve really turned it in to this incredible place.  Talk about community – I’ve been so impressed by what happens there.  LA is such a transient place – I prefer locations with a soul.  All those places have that.

What are your biggest musical influences?

John: The first time I recognized close harmony was The Beatles.  Then you start scratching the surface and discover the Everly Brothers, and if you like the Everly Brothers, you’re going to like the Delmore Brothers and the Blue Sky Boys, etc, etc. Harmony is one of the few magical things human beings can do:  bringing two voices together to create a third special and totally unique thing.

If you could go back to any decade, when would it be?

John:  I would have loved to be alive in the 1920s, but I’m sure I’d be bummed about a lot of things that were going on then too. I’m just trying to make the best of the time I live in I guess.

John:  I am a really big fan of the fish tacos on Sunset Blvd – El Siete Mares I think it’s called?  There is something about fish tacos in LA that is unlike anywhere else.

Do you plan on doing any recording with your friends?

John:  We have two 45s on the Third Man record label [produced by Jack White] and we’re talking about doing an LP prettysoon, it’s just a matter of everyone finding the time.  In the meantime you can hear us on the 45s.

Anything else you’d like to add ahead of the show?

John:  Just know this:  “It is better to light one tiny candle than to curse the darkness.”

John Reilly & Friends is happening this Tuesday, February 28, at the Bootleg Theatre in Echo Park at 8pm.  Tickets are available via The Fold website.  You should be there.