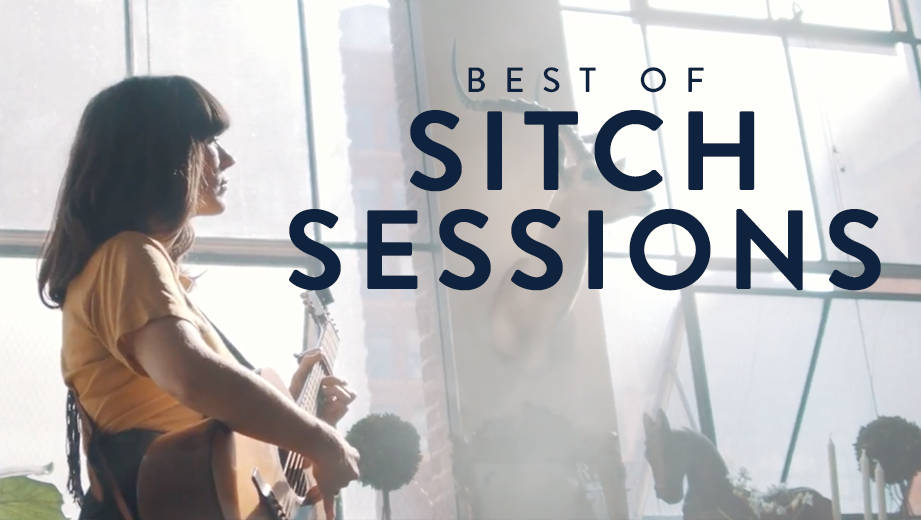 As we enter the new year, we look back on our favorite moments shared with some of our favorite artists in 2018. Check out our top Sitch Sessions, filmed in Los Angeles, Nashville, Philadelphia, and beyond.

Fresh off the release of their debut full-length album See You Around in February, Sara Watkins, Aoife O’Donovan, and Sarah Jarosz serenaded us among the palms of the Fairmont Park Horticultural Center in Philadelphia.
“Mal Hombre” – Rhiannon Giddens

Looking back on their 40+ years of friendship and collaboration, with no intention of stopping, Rodney Crowell and Emmylou Harris claim to be members of an “elite group” of those from their generation still traveling, touring, and performing. They laugh, “We’ve traveled so far, it became a song, at last”.
“Islands in the Stream” – Love Canon

How can you not smile from this bluegrass-inspired version of this Kenny Rogers and Dolly Parton classic?
“Rygar” – Julian Lage and Chris Eldridge

The duo gifted us with the building, joyous “Rygar”, off their album Mount Royal, which they describe as being comprised of “experiments” — songs that allowed them to explore their own capabilities and push the boundaries of what can be done on the acoustic guitar.
“The Restless” – The Lone Bellow

With this stunningly stripped-down rendition of “The Restless,” The Lone Bellow reminded us to keep our heads up and our hearts open in the face of adversity, something to hold on to for a fresh start in the new year.
“Alison” – Jamie Drake

Gearing up to release her solo album Everything’s Fine in 2019, alt-folk singer/songwriter Jamie Drake joined us in Los Angeles and regaled us with her immaculate tune “Alison.”
“Different, I Guess” – Lilly Hiatt

Lilly Hiatt, in the way only she can, ponders the dangers and glories of being vulnerable and allowing yourself to fall in love.
“Coming Down the Mountain” – Mipso

Mipso muses on retreating from the madness of society in this beautiful song, taken from their 2017 album of the same name.
“Took You Up” – Courtney Marie Andrews

Courtney Marie Andrews’ breathtaking vocals stunned us once again in a solo acoustic version of this track from her latest album May Your Kindness Remain.
“Thirty” – The Weather Station

The Weather Station (AKA Tara Lindeman) gave us the haunting and tense, yet fluid, “Thirty” from their self-titled album. They met us to perform the song at BOK, a historic Philadelphia trade school, closed five years ago, now re-purposed for its space to be used by the community for small businesses, job training, non-profits, and more.
“Firestarter” – Andrew Combs

And to close out the year, we have singer/songwriter Andrew Combs with a solo acoustic performance of this captivating, previously unreleased tune.