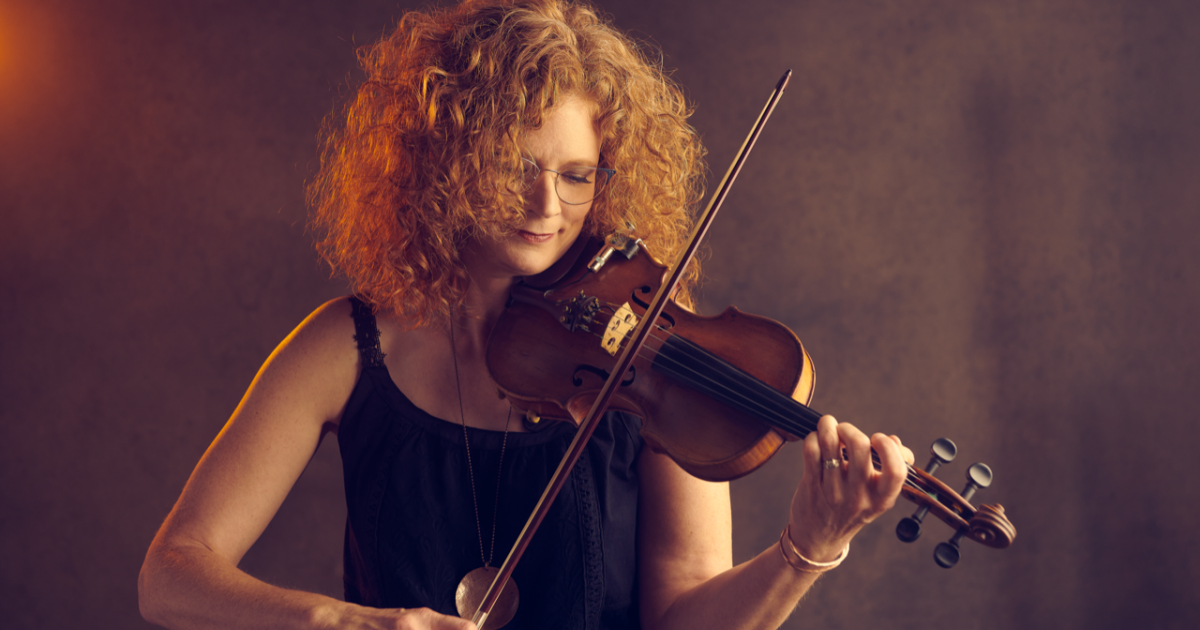 In the business of bluegrass, it’s one thing to have a song on the radio or win some fiddle contests. But when you have a total of 10 IBMA awards between your fiddling, singing, and songwriting, then you might really have something. And Becky Buller has it.

Her new record, Distance and Time, is out now on Dark Shadow Recording, following 2018’s acclaimed Crêpe Paper Heart, while 2014’s Tween Earth and Sky ended the 10-year gap after her debut Little Bird. Known of us, Buller included, knew that we’d be spending an eternity in 2020 socially-distanced, yet Buller’s new set of songs is just the thing to keep us company as we head into winter.

BGS sat down with Buller to talk about the new album, her songs, and fiddlers — lots of them.

There is so much collaboration on this album and your work in general, between your songwriting and the featured guests. Why is that important to you?

Oh, it’s just fun to have a chance to work with these people. And of course, my band is doing the bulk of the work on the record, and they’re amazing! I do a lot more co-writing these days than I used to do, it just helps me get in the right headspace. Making that appointment forces me to sit down and write, which is really hard to do these days, because I’m wearing so many hats. It’s hard to focus on the writing as much as I’d like to. When I have the songwriting appointments, it’ll get me all excited about writing. I’ll even do some writing on my own, afterwards.

“The Ride” is quite jammy, and “I Dream in Technicolor” is, well… technicolor! Knowing you, I wasn’t surprised to hear such diversity in the aesthetic. What’s inspired you to take this unique approach towards bluegrass?

With this record we were trying to stay rooted in the bluegrass tradition, but reach a little further forward. Most of the songs feature my band, standard bluegrass instrumentation. We did include drums on “Salt and Light” — Chris Brown and his drums of renown — that’s a first for me. Of course the Isaacs just added angelic harmony to that song. “I Dream in Technicolor” was a stretch, that’s more the progressive side of bluegrass music.

And of course we’ve got the more traditional, “The Barber’s Fiddle,” so I feel like there’s something for everybody on this album. We just tried to put together a collection of songs that offered diversity, but had that common thread of bluegrass. I personally like it when the songs on a record are diverse, it keeps me listening. So, that’s what I wanted to present. We recorded a cover, “Woodstock,” the day before the world shut down. The very last track that we tracked for the record.

Your voice fits so well with the Fairfield Four. What’s it been like to work with them multiple times now?

I just love their music so much. There is so much soul, and depth. I just feel the spirit moving when they sing. So it was a thrill to get back in the studio with them. It’s also the first time I’ve recorded a co-write with Jon Weisberger. We’ve had a really good track record of getting cuts with other artists, but this is the first time I’ve recorded one of our co-writes.

For someone who’s just getting interested in bluegrass, who are some of the fiddlers that you’d suggest as a gateway into bluegrass? Bluegrass Fiddle 101.

Well, Stuart Duncan. Particularly the Nashville Bluegrass Band’s Waitin’ For the Hard Times to Go record. Alison Krauss, Every Time You Say Goodbye for an album reference. It’s so good. Jason Carter, on Del & the Boys. Anything by Michael Cleveland! Kenny Baker’s Kenny Baker Plays Bill Monroe. And Eddie Stubbs on the Johnson Mountain Boys’ Live at the Old Schoolhouse.

Your show on the road is fierce, and I can already envision the way these songs will fit in. What does this set of songs mean to you now, though, when there aren’t many live performance opportunities?

Well, especially the song “More Heart, Less Attack,” I’ve been performing for a few years now. We finally had a chance to record it, and it’s so timely. It’s fortuitous that it came out when it did. It just encourages people to be kind to one another, and we need that so much now. Also, we chose the title Distance and Time before the pandemic. Ironic…