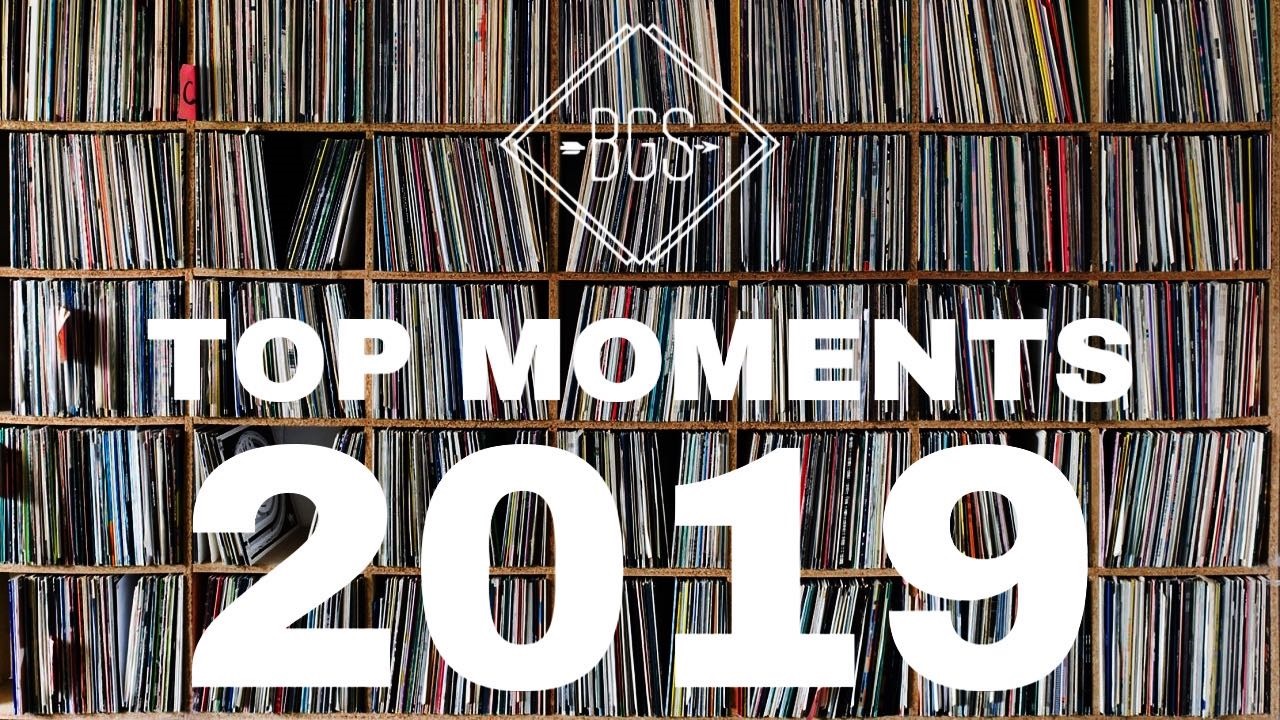 If music happened in 2019, but wasn’t a “song” or an “album,” does it make a sound– er… does it warrant real estate in any of the many year-end pieces, wrap-ups, and lists hitting the internet on a daily (sometimes hourly) basis? Why, of course it does! Each year BGS notes Top Moments of roots music — whatever form they may take — as a way of reminding ourselves that the art we each consume, especially of the musical variety, is often at its best when it eschews the formats and media we expect and/or most closely associate with it. What changes about the way we view a year in music when we alter the context as such? First and foremost, we change just that — our viewpoint. Turns out that makes a world of difference.

Speaking of top moments, one of the best for the BGS team took place just last week, as we premiered a brand new look with an updated homepage and logo. A lighter color palate, clean modern lines, and updated fonts usher in a new era for the site, and hopefully a positive reading experience for you, our beloved fans and readers. Not unlike the state of roots music itself, our new look is constantly evolving, but what’s at the heart of it remains timeless. Now, read about more moments that turned our heads and caught our ears over the course of the past 12 months.

When Chris Stapleton’s music video for “Second One to Know” hit YouTube, I found myself musing, “What are the benchmarks we use to determine someone’s level of notoriety? What are their claims to fame? Owning a tour bus? Having your first number one hit? Being the musical guest on SNL? Having a highway named after you? Or perhaps a proclamation from your local public figures designating a [Named After You] Day?” Seriously, can you imagine getting to a point in your country pickin’ / singin’ / songwritin’ career where your Game of Thrones cameo falls into the background of your music video star LEGO-self?

I would be remiss if in this blurb I did not mention another real-ass country singer/songwriter/rabble-rouser who dabbled in alternative visual media this year, too — that would be Sturgill Simpson’s “Sing Along.” More of this oddball, non sequitur energy in country in 2020, please. – Justin Hiltner

Epiphanies in the podcast series Dolly Parton’s America are too many to count, as host Jad Abumrad and his team explore the notion that the Tennessee songbird is a rare unifying force in the fractured socio-cultural universe — everyone loves Dolly! But the fourth episode, titled “Neon Moss,” finding the common ground of Dolly’s Tennessee mountain home and the Lebanon mountain home in which Abumrad’s dad (a doctor who became friends with Parton after treating her in Nashville) grew up is gripping on a cultural and emotional level. Bonus: BGS’ own Justin Hiltner and his banjo pop up as a key part of a later episode. – Steve Hochman

Were you seeing double this summer? Mandolin Orange, Tedeschi Trucks Band, and Shovels & Rope offered exceptional albums and sold tons of tickets. From the sweeping San Isabel from Jamestown Revival to the intimacy of Buddy & Julie Miller’s Breakdown on 20th Avenue South, roots duos were having their moment. Personal favorites included The Small Glories and Bruce Robison & Kelly Willis, but the true discovery for me was Dravus House, a Seattle duo who delivered an understated and beautiful album that blends Elena Loper’s vocal with Cooper Stouli’s soft touch on guitar to stunning effect. – Craig Shelburne

At 80 years old, Del McCoury has witnessed the rise of bluegrass while still being actively involved in it. (In fact, he’s got a gig this weekend in New York with David Grisman, Jerry Douglas, Drew Emmitt, Andy Falco, and Vince Herman.) An all-star tribute at the Grand Ole Opry provided perhaps the most musically satisfying night of music this year for me, mostly because The Del McCoury Band has still got it (and they make it look like so much fun). Check out their 2019 performance on Live From Here With Chris Thile. – Craig Shelburne

In an era when Broadway has seemingly been taken over by jukebox musicals that rehash the catalogs of legacy artists, watching Anaïs Mitchell pick up eight Tony Awards for Hadestown was a surreal triumph. For those of us who have followed Mitchell’s career over the past couple of decades, it was truly remarkable to see a grassroots musical that she first staged in 2006 reach the heights of Broadway, earning her a win for Best Musical and Best Original Score. “Wait for Me,” indeed. – Chris Jacobs

Ken Burns Digs Deep into the Roots of Country Music

Ken Burns has a long history of digging into America’s deepest roots, through documentaries like The Civil War, Jazz, Baseball, and The National Parks. In 2019 he took those roots in a more on-the-nose direction, exploring the long and varied history of American Roots Music through his PBS documentary series Country Music, which premiered in September. As the filmmaker himself said in a recent interview, “Country Music is about two four-letter words: love and loss.” Thanks to Burns, who looks unflinchingly at all of the different stories that have shaped this music, we get to see the love, the loss, and everything in between. – Amy Reitnouer Jacobs

After a long break, I made an effort to reconnect with two of the preeminent roots music festivals  in 2019 – MerleFest and IBMA’s World of Bluegrass. With other obligations in Nashville, it had been five or six years since I’d attended either, and both surprised me for different reasons. At MerleFest, I was struck by the caliber and diversity of artists, in particular for landing a headlining set by Brandi Carlile in her breakout year. Five months later, I returned to North Carolina to see IBMA in action, amazed by the way that the city of Raleigh has embraced the musical experience, from the Bluegrass Ramble to the StreetFest with plenty of outdoor stages. North Carolina, I’ve got you in my 2020 vision. #ComeHearNC – Craig Shelburne

Is “Old Town Road” country? Like millions, maybe even billions of fans, I’m inclined to answer that question with an emphatic “Of course it is!” But I’m also inclined to ask: What else is this song? Is it roots music? Is it folk? Blues? Yes, yes, and yes. That chorus is powerful in its simplicity, and it’s not hard to imagine Doc Watson singing those lines or Geechie Wiley intoning that sentiment mysteriously from some lost B-side, accompanied by a century of acetate scratches and surface noise. Almost accidentally existential, the chorus speaks to an unnamed American melancholy, and it can mean anything you want it to mean and be anything you want it to be. – Stephen Deusner

No, like literally. After 2019 we can definitively say that roots music as a whole does not need any men. From the first albums of the year (say, Maya de Vitry’s Adaptations or Mary Bragg’s Violets as Camouflage), followed by two indomitable women of the Grammys (Kacey Musgraves and Brandi Carlile), then two universally regarded supergroups (Our Native Daughters, the Highwomen), the resurgence of true legends (like Reba McEntire’s Stronger Than the Truth and Tanya Tucker’s While I’m Livin’), to a Newport Folk Fest collaboration that combined nearly all of our favorites, this year in Americana, bluegrass, old-time, and folk has been defined by women. There were pickers (Molly Tuttle, Nora Brown, Gina Furtado), there were scholars (Allison de Groot & Tatiana Hargreaves, Our Native Daughters), there were poets (Caroline Spence, Jamie Drake) — repeatedly this year I found myself in musical spaces that, if all of the men were subtracted, I would still want for nothing. #GiveWomenAmericana – Justin Hiltner

Co-write sessions and frontwoman-for-hire gigs aptly prepared Yola for the non-stop successes she’s had in 2019, from sharing stages with childhood heroes Mavis Staples and Dolly Parton to nabbing a whopping four Grammy nominations, including a coveted Best New Artist nod. Kicking off the whirlwind year was her Dan Auerbach-produced debut solo album, Walk Through Fire, a beginning-to-end stunner and a sure sign that Yola’s star power will only continue to rise. The ample steel guitar on “Rock Me Gently,” the countrypolitan charm of “Ride Out in the Country,” and the buoyant old-school soul of a new bonus track “I Don’t Wanna Lie” show off an eclectic roster of influences and a striking vocal range. But the album standout might be its only number written solely by Yola, “It Ain’t Easier,” a slow-burner with a hell of a bridge that pays tribute to the hard work behind even the greatest of loves. On the stage, in the studio, and in everything she does, Yola is putting in the work — and we can’t wait to see what 2020 holds. – Dacey Orr